In  my last blog, Fairbanks -- Part 1, I focused on the formal tours we took during our stay in Fairbanks, Alaska.  This blog will share some of our other Fairbanks experiences while on walking tours,  the Summer Solstice celebrations, foods, and unusual sightings.
Downtown Fairbanks

Fairbanks is not that large of a town, but the locals are very involved in making their community tourist-friendly.  A flood control project was completed not that long ago and the Chena River now flows peacefully through the downtown area.  The statue to the left is part of a huge plaza that celebrates cultures of both the Alaskan Natives and Indian Nations that were the early settlers of the area.  Walking and bike paths welcome folks along both sides of the river.
Observation area and footbridge.  Fun bike racks along river path.  How about Fairbanks by Segways?

The local visitor’s center along the plaza features an area where competitive mushers can introduce their racing dogs to the tourists. Jody, a finisher of both the Iditarod and the Yukon Quest in her rookie year, was showing her dogs the day we stopped by.  These dogs are bred for racing, and are NOT Alaskan Huskies.  The dogs loved the attention, especially from kids.

The biggest crowd we saw on our walk-around day was at the local Fudge Pot store!  (No, we didn’t stop)

The gang stopped to watch remote-controlled NASCAR racers.  This Army band had the crowd rockin’ with heavy-metal tunes, and local vendors filled the plaza area.

Food menus were interesting if you like reindeer meat.  Bouncing booths were also popular. Check out the broncing salmon.

Midnight Sun Fun Run
Saturday night the town kicked off the summer solstice with a 5K run that started at the University and finished near where we were camped at Pioneer Park.  The race began at 10 pm and officially ended at 12:11 a.m. with more than 3500 “competitors”, using the term loosely for those in costumes or pushing strollers and walkers.

years the “Salmon Bake” folks have put on nightly dinners featuring all-you-can-eat grilled salmon, prime rib, salads, desserts, etc.  This company has their own fleet of 10+ buses that go out to local hotels and campgrounds to bring in the tourists.  Commercial tour buses also drop off a ton of folks every night – rain or shine.

On Friday and Saturday night they add King Crab Legs to the menu so we used our discount tickets to stuff ourselves one night.
Before and After Dinner Scene 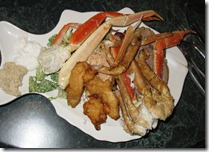 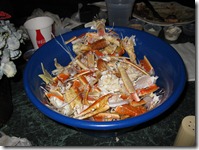 Wildlife Report:
We didn’t see much animal wildlife while in downtown Fairbanks, but we did see a couple of unusual scenes during our local touring:
A street of “sod-roofed” houses. (Sod makes for good insulation.)

This plane (a DC-4??) was in a local front yard and had a boarding staircase nearby. 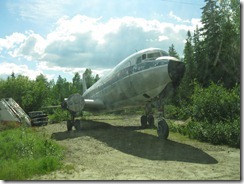 Fairbanks was a “destination city” for us.  That means we planned to “sit” for a few days and play tourist.  We spent five nights at the

city-owned Pioneer Park, which is actually a historical theme park with RV parking areas.  We paid $12/night for dry-camping, but we were at the far end, near some trees and across from the popular “Salmon Bake” area (more on that in my next blog).
Fairbanks was also the first place we really took advantage of our TourSaver 2-for-1 coupon book.  It has already paid for its initial $100 cost in ticket savings for the four formal tours we did in Fairbanks.
UAF Museum of the North
Our first stop was the University of Alaska, Fairbanks campus Museum.  This very modern 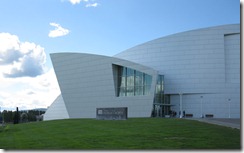 looking 2-story structure sits atop the tallest hill and, so they say, on a clear day you can see Mt. McKinley in Denali National Park.  Unfortunately, for us, the clouds blocked that view.  Nevertheless, it was an impressive building and collection.

Gloria and Frank tried some hands-on activities in a special energy display area.
I especially liked the “found art” rustic outhouse with lots of reference materials to “study”. Click to enlarge. 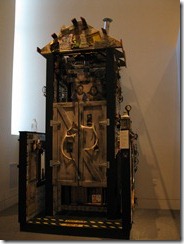 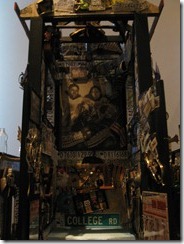 Our adventure started on a narrated train ride (with a musical prelude of Johnny Cash tunes and a “North to Alaska” sing-along).  Along the way “miners” demonstrated how the gold was mined during the brief Alaska Gold Rush.  We were then show how the El Dorado Gold Mine Company still makes money – on tourism.

We were shown how to pan for gold and then each given a small bag of dirt, a gold pan, and directed to row after row of HEATED water troughs so we could all strike it rich. 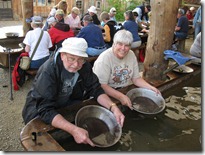 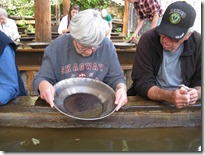 At the end of the session I was the big winner in our group! 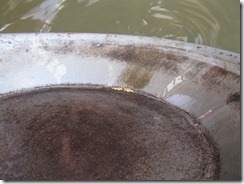 My gold pan yielded approximately $17 in today’s market place.  You definitely need to look closely in the bottom of the pan to see my retirement fund.  (The others weighed in with gold valued from $5-7 each.)  They don’t actually pay you for your gold, but “for just $29.95” you can buy a piece of jewelry so you can wear your wealth.  Our gold went home in the black film-style canisters with a gold label.  Just to make you feel like you struck it rich, they also allow everyone to hold a “nugget” valued at $60,000. 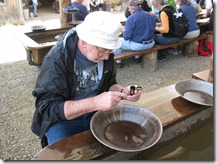 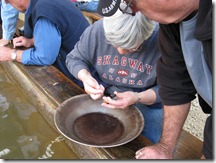 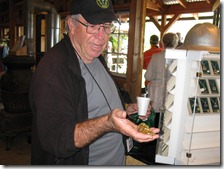 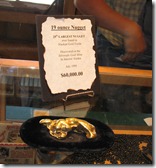 Hmmm, do you really think they let everyone hold a “real” nugget worth $60,000 that was on a counter by the door?
Riverboat Discovery Cruise
We used our TourSaver coupon again for the 3.5 hour Riverboat Discovery Tour along the Chena River.  It truly deserves the claim they make that this is “rated the #1 boat tour in North America”.

With the advice from Boomers who took the tour the day before us, we sat on the LEFT side of the boat and had an unobstructed view of almost all the highlights.  This cruise has been operated since 1950 by same Alaskan family for four generations.  The sternwheeler has four decks, all equipped with TV monitors, an excellent sound system, a good narrator, and microphoned interaction with a number of on-shore participants.
This float plane pilot took off in front of us, circled, and landed along side while talking live to the group over the PA system about life as a bush pilot. 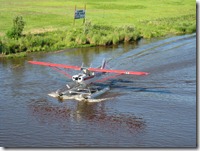 We then stopped along shore of the late Susan Butcher’s (famous Iditatrod sled dog racer) family estate where the family still trains racing dogs.  Her husband then took the dogs for a training run pulling a quad runner that we were able to watch from the boat.  Later on we were able to see some of the dogs up close and meet the family’s young daughter who chatted about their racing farm.

The boat then traveled downstream to the Chena Indian Village were we disembarked and had an hour filled with cultural information and demonstrations by young local Alaskan Natives. 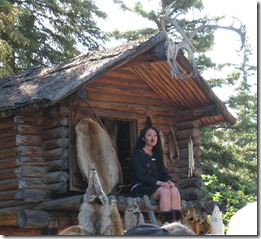 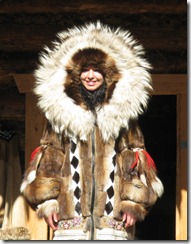 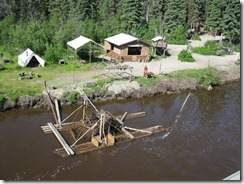 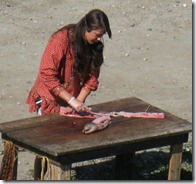 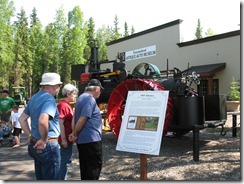 Following our cruise we were off to an antique auto museum that featured cars that the collectors thought demonstrated “unique” qualities worth noting.  The cars dated from a 1899 Hertel (on left below) to a 1936 Packard (right).  There was also a special collection of Alaskan vehicles and an interesting counter display of mints – including “Sarah’s Embarrassmints”. 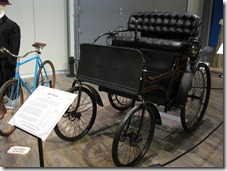 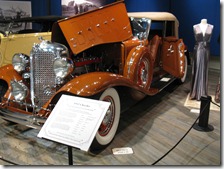 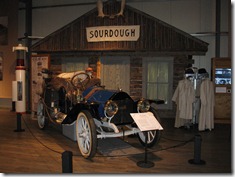 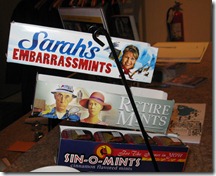