Family, WARE and Where Else

Our April 6-19, 2012 Travels
FAMILY TIME IN PLEASANTON
We normally spend Easter week with our family in the Palm Desert area, but this year our daughter told us they decided to stay home in Pleasanton. We joined them there for 12 days, staying at the Alameda County Fairgrounds, just blocks from their home. 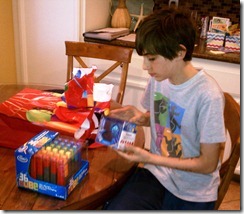 In addition to enjoying Easter with our daughter’s in-laws, we were there to also celebrate our oldest grandson Taylor’s 12th birthday. He loves being challenged, so I found a couple of “puzzles” for gifts.  He solved the first one in just a few minutes.  The second one, known as the Think Fun 36 Cube took a little longer – one night.
According to the game makers:


“With quadrillions of possibilities, 36 Cube seems simple but is stunningly complex. Build a perfect cube by placing the 36 colored towers onto the game base following two simple rules: Only one of each colored tower can be in each row and column, and the towers must fit in the base to form a perfect cube with all towers at the same height.”

Notice the puzzle pattern in the the unopened box above.  The photos below show what the puzzle looks like successfully completed!  The towers are different heights which makes the puzzle that much more challenging!  With a little help from online resources (duh…) , he was able to solve it the first night.  He continues to work on it without the “cheats”.  If you want to try it, cheapest price was on Amazon. 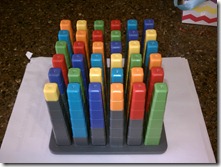 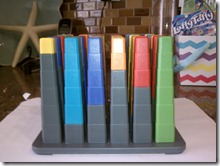 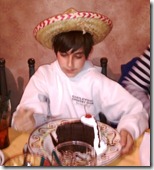 Taylor loves burritos, so we celebrated his birthday dinner at Alberto’s Cantina in Downtown Pleasanton.  Grandparents Barb and Tom Treto arranged for the sombrero, singing waiters, and the special treat after dinner.

He also loves “reverse engineering” and studying how things work. He is fascinated with roller coaster designs and studies YouTube videos before trying to design his own coasters with K’Nexs or with gaming software.  He has also been competing on a Lego robotics team and attending summer camps learning to write role-playing software games. [Grandparent bragging is permitted in blogs!]  My Facebook friends may recall the Lego VW Camper Van he built for us for Christmas.  It took him a day and a half! 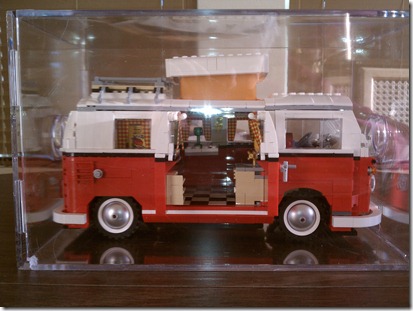 This summer we are taking Taylor on his first solo RV trip with us. (Younger brother Tanner plays sports and he’ll take his trip when he gets free time.)  We think we will be heading to the Seattle area in July so he can visit the Boeing Aircraft factory, Microsoft, the EMP Museum (interactive Experience Music Project) , and maybe to a glass blowing museum. We’ll see what lasts longer:  Taylor’s interest in touring or Luke’s patience with Taylor’s curiosity about how things work. <grin>  Rather than back-tracking our travels, we may have Taylor fly back home while we continue our Summer-Fall trip.  We host the Albuquerque Balloons and Boomers Rally in October before we come home around the first of November.
WARE IN LODI
After getting caught up with our family in Pleasanton, we were off to the first Western Area Rally for Escapes (WARE) in nearby Lodi, California.

Friends Sharon and Don Del Rosario volunteered to serve as the first WARE Rally Directors and our other close friends, Frank and Gloria King, were on the advance team to work on the parking crew and spend a number of days immersed in door prize collecting chores. I had full intentions of jumping in to help wherever needed, but a new health challenge surfaced.

SEE NO EVIL, HEAR NO EVIL, OR SPEAK NO EVIL… 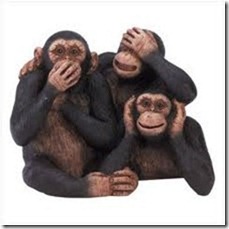 I felt like two of the monkeys when we discovered my little bout of flu I had the previous week had left me without a voice or hearing in one ear.  I had a full-blown case of laryngitis which was  totally disabling for this constantly-talking RVer.  On top of that, on Sunday night I developed extreme pain in my left ear and total loss ALL hearing in that ear.  I contacted my personal Kaiser Permanente doctor in Lincoln on Monday and he got me in that day.  So, rather than participating in the WARE activities, we were off to Lincoln, 60 miles away one-way, where  I was diagnosed with an outer-ear infection and given antibiotics and ear drops.  But because of my on-going Valley Fever status, additional blood work was requested.  So, on Tuesday, we headed north to Galt where our Kaiser HMO has a clinic and I could do the labs.  (A follow-up appointment with the audiologist confirmed the hearing loss was because of an infection blockage, and not bone damage caused by the Valley Fever or diabetes. Permanent hearing loss has deteriorated to the point where I will be adding hearing aids when the infection clears this summer.)
Can you hear me now?  NO!
We really did not get a chance to enjoy the WARE gathering. I was visiting with folks with a pen and notepad in hand and had pre-written questions and answers. We missed most of the scheduled activities, but we did participate in some of the evening meals and door prize give-ways. (We won a wine tasting tour, but because we don’t drink, we “made a friend” and gave it away.) 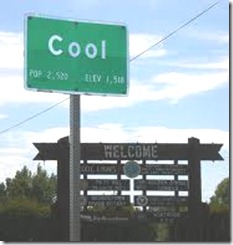 Following WARE, we drove the 67 miles home to Cool. When we moved in 1979 to this small Gold Country foothill community, east of Sacramento off Highway 49, most of the cars were adorned with the above saying on a bumper sticker to declare our community’s unique, fun name.
The town name has nothing to do with the weather, but locals do have a “cool” attitude!
The original name of the community was Cave Valley, but that name was not available when the town requested a U.S. Post Office in 1885.  For the record, locals claim that Cool is named after a Gold Rush era minister, Aaron Cool, who was serving the area when the town asked if they could use his name for the requested Post Office. Recent research, however, claims that the name source may not be entirely factual and the true name of the minister was Peter Yawger Cool.  Nevertheless, the town name is officially, Cool.  We no longer have the bumper sticker, but we do have a motorhome license plate that reads COOLRVR and our email address and geocaching nickname starts with COOLRVERS.  And, of course, most of our RVing friends know us as either CoolJudy and Cool Hand Luke or “Juke and Ludy”.   We answer to all of those names and Cool is a place and an attitude!