Non-RVers must think that those of us who live extended or full time in our “homes on wheels” must be crazy dealing with all the mechanical issues we encounter.

When you put a 30-40-foot box made of wood, fiberglass, and steel framing on a set of six wheels going down the freeway at 55+ mph, “stuff” is going to happen.  Many say our recreational vehicles are constantly undergoing a 6.0 earthquake when on the road.  Of course there are roads like I-5 in Central California or the desert washes of Arizona where that might run that earthquake rating up to a 10.0 on the Richter scale.  When not moving, however, we LOVE our “condo on wheels” and dealing with the maintenance issues is just part of the routine.

Our 2007 Itasca Horizon 40’ TD was built on a Freightliner chassis and has a Cummins 400 diesel engine and an Allison 3000 transmission. We carry 100 gallons of diesel and 28 quarts of oil!  We frequent truck stops and run with the 18-wheeler “big boys” (although we run a lot slower).  So maintaining all this hardware requires specialized service centers and our choice for our annual maintenance is the Freightliner of Arizona Service Center in Tolleson, a suburb of Phoenix, Arizona. 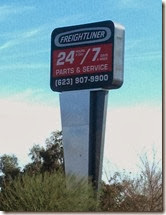 This is not your old greasy roadside truck stop.  Two years ago the company moved into a huge facility with dedicated work areas for trucks, emergency vehicles, and motorhomes.  (In their old location it was common for the motorhomes spending the night hooked up to electricity to be parked next to fire trucks and ambulances which also need annual certified maintenance.)  RVers with appointments for service are encouraged to come in the night before to be ready for service techs at 7:00 – 7:30 a.m. and if your service runs late or requires extra days for parts, you are generally allowed to stay on site.  Having electrical hook-ups is common, but having full-ups in a nice facility is wonderful.

At the new facility the current RV parking area consist of seven level spaces with 50 amp electricity, fresh water, and a sewer dump.

There is a covered picnic area with two BBQs, tables, and lush green lawn. 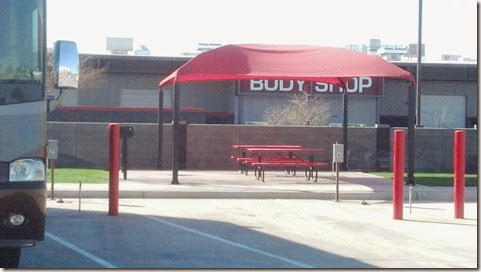 The highlight for Miss Star is the fenced doggie park with lawn for rolling on and seating for the photographer. 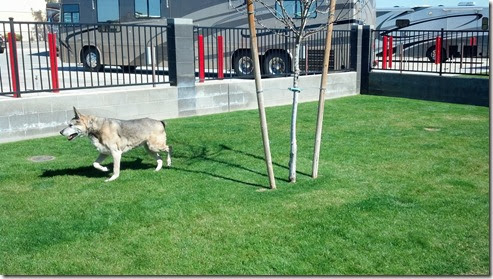 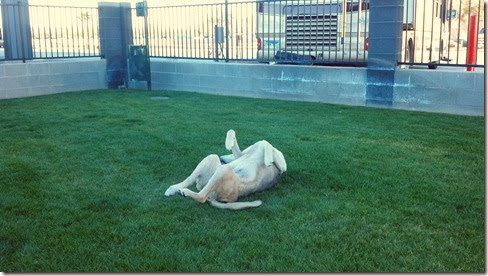 Star patrols the inside perimeter and then claims the lawn for herself.  Too much time in the Arizona deserts.  Green, green grass – oh, yeah!

Our appointment was for Wednesday but we called ahead and booked a free overnight site for Tuesday.  We arrived about 1 p.m. and, surprisingly, they had a cancellation and asked if they could start working on our “list” early.

We grabbed some lunch to go and then headed for Friendship Park where there is a large doggie park with a shade canopy and a big tree (rare in Phoenix).  Star greeted a few canine visitors but then sought out the shade. 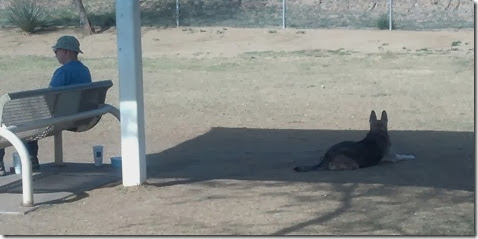 When we returned to Camp Freightliner we had new neighbors – snowbird grain farmers from Saskatchewan, Canada.  It is very common to meet folks on the road whose paths we have crossed before and this was just another occasion,  No, I was pointed out as “CoolJudy”, but we had shared an afternoon at a laundromat in Indio, CA (near the Indio Elks) back in January.  They remembered me – hmmm.

We had two primary items on our “to do” list for this service appointment.  First, we needed to have the “routine” 65,000

mile service done; and secondly, our dash air conditioner need fixing. The temperature outside was already reaching into the 90’s so that was a definite priority.

Since we started coming to this Freightliner shop in January of 2008, we have been very impressed with our Service Manager, Kirk Ault.  He is the one on the other end of the phone when you call into FL on their trouble line.  He KNOWS RVs, and we trust his troubleshooting and his technicians.  This year, Julio, who worked on our rig last year, was right on target with his evaluations.

After two days in the service bay we ended up replacing our hoses and a major belt, re-charging the AC, and changing engine and transmission fluids.  They also “cleaned” the engine compartment of all the dirt and grime from desert camping, and replaced filters.

Yes, the “camping fee” was zero, but the service call cost us about $1200 per night.  We are confident we are good to go again another year.  We’ll be back at Camp Freightliner next winter.