We got back on the road this morning after spending extra time in Whitehorse, YT.  A cold or flu bug first caught Gloria, then me, and finally, caught up with Luke.  Since our schedule is flexible, we stayed a couple of extra days.

If you read our last blog, you learned that “Stuff Happens”, so today I am glad to report that NOTHING happened! 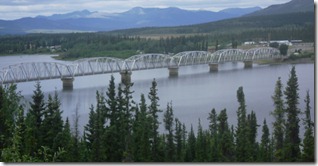 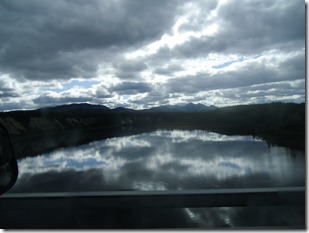 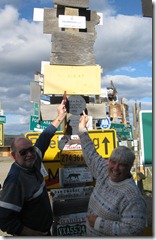 It is about 20 feet from where we all added our signed Boomer Stickers in early June.

Our exit route from Alaska is taking us south of Watson Lake to Dawson Creek on Highway 1.  We missed this section of the infamous Alaska Highway when we chose to come north from Prince George via the Cassiar Highway.  We have about 613 miles to count down to reach Mile Marker “0” in Dawson Creek, BC, so we can claim driving the entire Alcan.

Heading for the Lower-48

We have decided to slip back down to E. Wenatchee, Washington to catch up with our long-time former neighbors Janet and Howard Pelton.  The Peltons were responsible for putting us in touch with Dave and Jayne Bredin, the hosts of the Kenai fish camp we enjoyed visiting. From there we will jump on Hwy. 2 then I-90 and head for the Boomers’ Black Hills ‘Rang in Sturgis, SD (after the motorcycle rally) and then back to Gillette, WY for the Escapees’ Escapade national rally starting August 28. 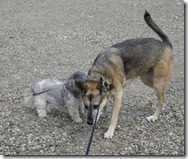 Except for a mouse that ran in front of the Kings’ 5th Wheel today, the only wildlife we saw were our fur kids: the Kings’ “Shadow” and our “Star”.

NEXT: HEADING SOUTH FROM ALASKA