Southbound from Dawson Creek, BC

(This blog covers August 6-8, 2011.  We reached the “lower-48” on Monday afternoon and have been visiting with friends in the Wenatchee, WA area the last few days.)

After leaving our traveling partners, Gloria and Frank King, in Dawson Creek, Saturday’s travel started with sunny skies and good roads.  We got diesel for $4.76 gallon at “No Frills Gas Bar” and then headed back to catch southbound Hwy. 97.

Passing through Chetwynd, BC,  it was fun glancing (we didn’t stop) at the various chainsaw sculptures in front of all the businesses and along the roadway.  This is the home of the International Chainsaw Carving Competition.

We knew we would be hitting major road construction, but it was much worse than expected.  Back on June 27, this area of the Peace range suffered major rains (133 mm - 5.25” in one storm) that washed out multiple bridges and large sections of roads along Pine River.  According to the Ministry of Transportation website, there were 16 different sections of the highway requiring major road/bridge re-construction.  One report said the damaged area was about 30 km (18+ miles) in length.

The first photo shows the downed trees that accumulated along the Pine River.  Many small hillside canyons were also full of mudslide debris. 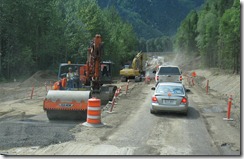 We were actually only “stopped” for about 10 minutes, but we were then escorted most of the way. Here’s a sampling of the road re-construction areas: 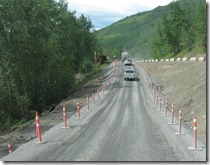 This is a mountain they are using as a quarry for the rocks needed for the project.

When we finished with the construction zone, we found a large rest area.  Luke took a nap and I walked Star and read.  It was an easy drive the remainder of the way into Prince George.

We stayed at Southpark RV which gave us a 15% Escapees discount for our 30 amp pull-thru site.  The turn into the site was a little tight with the car attached, but Luke did a great job.  He even trimmed a few branches with his trusty hack saw so the next guests won’t have to deal with the trees.

Since we had driven this section of our route on our way North back in late May, it was fun to see all the things we remembered and all the other things we had missed.

In Williams Lake, for example, when we were going “north to Alaska” we had stopped at the 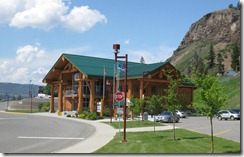 Visitor’s Center and collected our first pile of brochures for places we had never heard of then.  Now, we keep moving that “bag” of brochures, and the many more we collected along the way, as we enjoyed stopping at many of those locations.

As we retraced our route we noticed more cattle and dairy ranches, hay growing operations, and lumber and pulp mills than we had seen in Alaska or the Yukon Territory.  We also saw the growth of the gas and oil energy industry in B.C.   These transmission lines carry energy across the province to the Vancouver area. 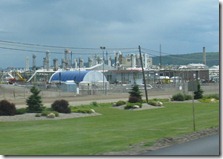 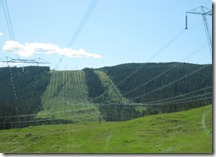 trip.  The routes we have taken have passed hundreds of rivers and lakes and, until now, we had yet to see a “pleasure” boat – only fishing and tour boats these past two months.  The weather WAS perfect in the mid-70s and it was a weekend!  Boaters were out on Williams,  Le Lac Hache (Lake of the Ax), and McLeese Lakes.

The next leg of our journey south took us to Cache Creek where we overnighted at Brookside Campsite.  When we stayed here on May 30th, the “brook” was a raging creek with rushing waters lapping the banks. This time there was barely a trickle of water coming over the rocks. 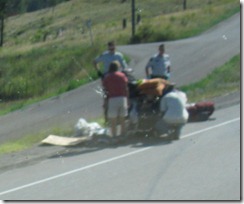 We did have an unusual sighting as we approached the town of Clinton, BC.  Two police officers were making a traffic stop – on a grocery cart!  This photo isn’t the sharpest, but we did get to see the cart again parked behind the Chevron station in Cache Creek.  The owners were not around but their request for help from a pick-up truck was spelled out:  their destination was Osoyoos, the USA border crossing. 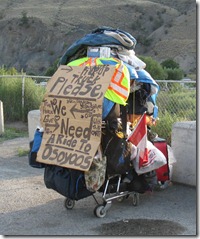 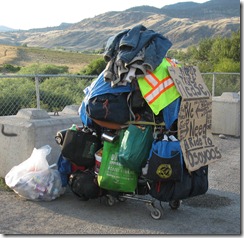 HEADED FOR THE BORDER

This last day of driving out of Canada turned out to be more eventful than the previous couple of days.  We had three or more routes that we could take out of Cache Creek to reach Osoyoos and the USA border crossing a few miles south of there.  The Milepost guide book suggested just staying on Highway 97 through Kamloops.  Our friends recommend a cut-off on Highway 5 south that would bypass many of the small and medium urban developments, and “Claudia” 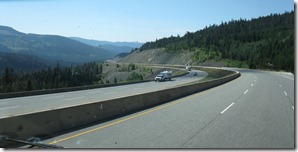 (our GPS) always has something in mind.  I programmed the GPS to take the Hwy. 5 bypass which turned out to be a beautifully smooth 4-6 lane modern freeway.

This was a popular route for the truckers, too. 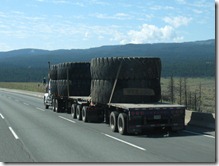 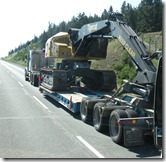 Since the roads looks so nice and direct, I decided to pull out the laptop to start this blog.  While I was not paying attention, “Claudia” gave instructions to take the next exit. We did and soon discovered it was NOT the way we actually wanted to go.  Oh, it would get us to 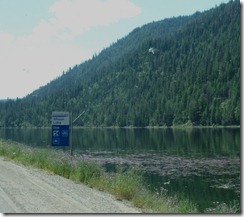 Hwy. 97 near Osoyoos, but this route was a much smaller roadway that cut through canyons, along rivers, and through farms.  At first we looked for a place to turn-around to go back to our intended route, but that wasn’t going to happen.  So off we proceeded…. 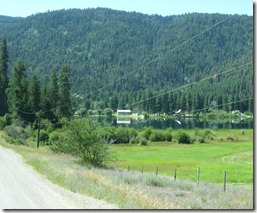 As it turned out, we saw many of the same truckers (including the huge tire truck shown above) were on the same roads.  They had chosen this route to avoid Hwy. 97 through the many “urban” towns along the way.

Unfortunately, this section of road was also under repair and work crews were using tar wands and gravel to seal many weathered cracks in the road.  We carefully passed the workers without incident, only to have an SUV passing us going in the other direction kick up a rock that caught our huge windshield. Both our vehicles were going slow – but stuff happens

Our rock chip as seen from the inside looking out.  Kind of looks like a bunny rabbit. 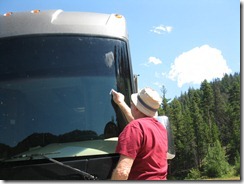 Here’s Luke carefully cleaning the rock chip and sealing it with scotch tape until we can get it filled.  So far it has not “spider-webbed”.

Cracked windshields while traveling along miles of graveled roads in Alaska were something we had been warned about.  Unfortunately, this happened in lower British Columbia, just two hours before we reached the USA border.  “Stuff” can happen anywhere, anytime.  The good news is we reduced our insurance deductibles for glass coverage before we left. We had to replace a smaller “one-piece” windshield on our previous motorhome and we had to pay $500 towards the $3,000 bill.  IF we need a new windshield this one has a $100 deductible ($0 deductible on the car windshield). 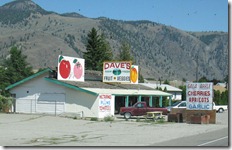 The final two hours of our trip through BC brought us down from the mountains and through a busy little town called Keremeos.  All the way through town we were greeted with fresh fruit and vegetable stands.  Wineries are also popular stops.

Just before 3 pm we reached Hwy. 97 in Osoyoos, British Columbia, turned right and went about four miles to the actual Canada-USA border crossing. 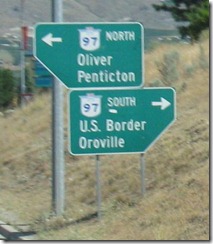 Border crossings are always unknowns.  First, you have to negotiate narrow lanes, hide your camera (no photos, YES, SIR!), and then be prepared to answer all questions honestly.  Since we aren’t big souvenir shoppers and don’t carry booze, firearms, or illegal aliens, the first stop went pretty fast.

We were then directed to pull forward and stop for an USDA agricultural inspection.  We had already cleaned out the refrigerator of most fruits, vegetables, and meats.  Our one Washington State apple made it through okay.  Interestingly, we were also asked about dog food purchased in Canada.  Since we had purchased Star’s food in Anchorage, Alaska, we were good to go.

Our Alaska Adventure began May 24 from the Sacramento area. On May 30 (Day 7) we crossed north into British Columbia from Sumas, WA.  On June 3-4 we slipped into our first Alaska stop, Hyder, and then bounced in and out of British Columbia, Yukon Territory, and Alaska for the next two months.

When we arrived in Wenatchee, Washington on August 8 (Day 77), we had traveled 6,810 miles by motorhome plus an additional 1,460 miles in our Honda CR-V for local sightseeing.  We stopped (overnighted or “camped”) at 40 different locations.  We spent $1550.69 on camping fees.  Surprisingly, we only “dry-camped” free of charge on six nights.  Our averaged “paid” rate was $21.54 and our overall average was $19.86 per night.  I don’t have a total on food and entertainment/touring costs.  We did save about $580 in our 2-for-1 TourSaver coupons (after the initial $100 cost of the book.)

I took about 5,000 photos and posted 36 blogs.   Thank goodness for digital (vs. film) photography!

we have bee silent 'riders' for the trip but welcome back to the USA..you drove through our favourite little town, Keremeos!!..Harkers Fruit Ranch and Winery..we know the owners!!..small world..enjoy your stay in Wenatchee!!

Welcome back to the lower 48 ...enjoyed the ride along.

We have been riding along and enjoying the trip. Thanks for lertting us tag along. May see you at the Escapade in Gillette.

Welcome back. I remember our visit with you and the Kings as you were planning your trip... and felt like we traveled along with you. :) See you in Sacramento in October or November?

Thanks to those who followed our Alaska Adventure through this blog. This was my first blog and can't believe it got over 18,620 "hits" during the past 2.5 months. We are headed to SD for the Boomer's Black Hills 'Rang next weekend, then back to WY for Escapade, then south to Albuquerque, NM for the Boomers & Balloons 'Rang. We are hosting 40 rigs and crewing for at least 5 pilots we know, plus new ones our gang will meet. Home to Cool in late October.