Luke is retired civil service, having worked for the Dept. of Defense (Air Force) for 37 years, so he is eligible to use the “FamCamp” military base campgrounds.  (I get to come along as his “guest”.)  After leaving Wenatchee, WA, on August 11, we moved east to Fairchild AFB just outside Spokane where we booked five nights.  Our primary reason for the extended stay here was the convenience of the Spokane Airport, just 15 minutes away.  You see, Grandma was needed to baby-sit.  [Oops, “kid-sit” is now the politically-correct term when the grandsons are (almost) 9 and 11.]

To make a long-story short, the other grandparents were “booked” to sit with the grandkids while our daughter and her husband were scheduled with 30 of their friends for a short (Wed.-Sun) group vacation.  A family health emergency meant a sitter was needed.  Since most of their friends had already shipped off their kids to relatives, it was hard finding a replacement.  As it turned out, a close friend could watch the boys Wed.-Fri, but could Grandma fly down to help out Friday afternoon to Monday morning?  It took a little time to convince Grandpa he could survive a few days without me, but it all worked out.

Robin and Troy (aka “the kids”) had a free round-trip ticket I could use to fly from Spokane to Oakland.  They booked the flights and e-tickets arrived in my email box with confirmation numbers.  I would be flying Southwest and could “check-in” 24 hours in advance online for my boarding pass.  Print it and show up Friday morning.

Getting to the airport would be a snap, it was just 15 minutes up Hwy. 2 and a right-hand turn takes you right to Airport Blvd. and the terminals.  Unfortunately, getting “out” of the airport was going to present some challenges for my navigationally-challenged husband.  To meet those challenges, we scheduled a “dry run” on Thursday afternoon.  Getting back on the four-lane Hwy. 2 WAS an issue.  There were no stop lights or turn lanes to make the needed left hand turns safely. We tried three other “routes”, circling through the terminal areas each time.  One got us onto I-90 and major road construction, another got us close to Hwy. 2, but from our direction, you could not make a left turn.  A third route got us a center two-way turn lane which meant only having to cross two lanes of busy traffic.  Ultimately, Luke decided he would take his chances and it worked out that the traffic was light and he made it back at the rig before I had boarded the plane. Phew!

I hadn’t thought about my flight, but I managed to get a window seat that had a spectacular view of Mt. Rainier and Mt. St. Helens. 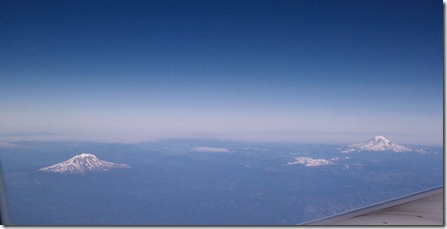 The kids live in Pleasanton, California, about a 45-minute drive from the Oakland Airport.  That’s great if someone is there to pick you up, if not, then it becomes a question of how to get from the airport to their house since they were in Cabo and the grandsons are too young to drive.

The blue SuperShuttle van service would have cost $55 so I opted to take BART, the Bay Area Rapid Transit system, that has a station

not far from the airport and  stations in Pleasanton, my destination.  For $3 I grabbed the “AirBART” shuttle bus that took me to the Oakland Coliseum BART station.  For another $3.45 I got a one-way ticket from Oakland all the way to Pleasanton.  I was gloating – instead of paying $55, I had made it to Pleasanton for just $6.45.  Unfortunately, the taxi fare (and tip) from BART to their house came to another $17.  I was still ahead of the game, but… those last 3 miles were certainly expensive!

With keys to my daughter’s car, I was able to pick up the boys who had spent the morning at a friend’s house. A trip to the grocery store for “favorite” foods and take-home dinner and we were set. 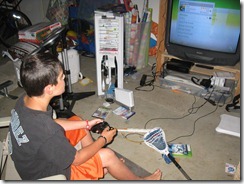 Tanner, who turns 9 on Aug. 20, was under the weather most of the weekend.  Fever, running nose, and no energy kept him quiet most of the time.  He did get an early birthday present from us – subscription to an X-box service – that he played with for a while.

Taylor, 11, loves computers and he talked me out of my laptop the 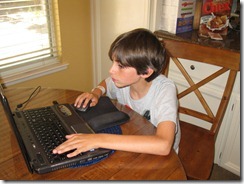 minute we got home.  For his birthday back in April we agreed to send him to a week-long high-tech computer programming camp at Stanford University.  He attended earlier this month and learned to produce a role-playing interactive game using Multimedia Fusion 2 Developer programming software plus he learned Photoshop and Illustrator software for the scenes and CD-cover artwork. Click the link above to see the curriculum outline and what they accomplish during this camp. This is high-end stuff we taught at the college level when I was teaching Desktop Publishing and Computer Information Science application courses.  Kids are growing up with these skills.

The third member of the family is Izzy, our grand-dog.  Izzy had a bad week!  The family’s backyard was being re-landscaped.  New concrete had been off-limits until that Thursday and the workers were still prepping the dirt for the new lawn.  She could only be out on a leash, not her favorite thing.

Izzy spent many hours watching out the back door while whimpering, “Please, won’t you let out to chase the birds???” 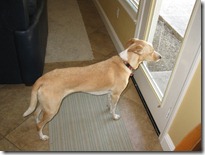 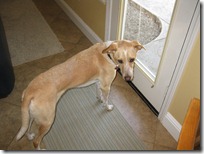 The grandsons did get a chance to leave their mark on the new patio with parental approval.

Our only other activity was a Sunday morning movie: The Smurfs. I can’t go to a movie without getting popcorn, so I did have my treat for the weekend, too.

The kids returned home Sunday evening and we had an hour or so to chat before everyone crashed.  Robin agreed to drive me directly back to the airport Monday morning so I wouldn’t have to take BART during the commute hours.  We did get another short time in the car to get caught up since we last saw each other in May, before we left for Alaska.

The trip back to Spokane was non-stop and Luke was proudly waiting inside the terminal with extra coins in the parking meter. I was safely back at the rig before noon, did a couple of loads of laundry and we found a local casino buffet for dinner.  We didn’t take any time to tour the Spokane or Coeur d'Alene areas as originally planned.  That will be another trip.